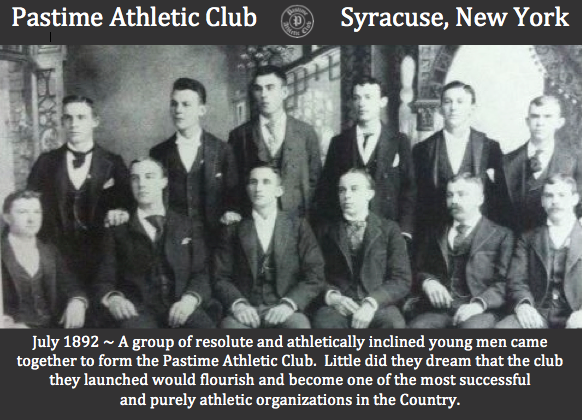 We found this article and many others that we will share here in the Post Standard Archives. Anthony Corcoran did an incredible job as Manager of the Club and now his brother Andrew is going to pick up where Anthony left off and we are going to move forward with those plans to build a brighter future...

The private sports and social club in the 1300 block of North Salina Street is 113 years old this year and doing just fine, thanks. Last summer, there was talk around town that one of America's oldest athletic clubs might fold. "We're not closing," Anthony Corcoran says as firmly as a man can.

Anthony is the club 's new general manager, hired last July when a crisis threatened. Since then, Pastime 's gained 130 new members, paid off a debt of $30,000 and taken on new

energy, according to lawyer Ralph Dodge, the new president, and Gabe Buschle, a past president who's club historian.

"We had to reverse the trend and we did. You can see a difference here," explains Gabe, a retired dentist from Central Square. "Things weren't up to par and we were losing people."

Pastime has a limit of 2,200 members in its bylaws. For years, the quota was solid, with a list of several hundred men wanting to join. The rolls dipped to a low of 700. There are now 1,100, and "we're getting five or six applications a week," Anthony says.

Ralph and Gabe are part of a new board of directors sworn in this month. Nine of the officials are new to the board, out of 12.

Ralph and Gabe say the former board's worries about the future of the club showed up in a letter to members last summer, asking them to chip in or face the possibility of closing. Although the letter raised $14,000, these veteran members say they regret sending it.

"It was erroneous," according to Anthony Corcoran. "It was based on wrong information in an internal accounting."

Ralph and Gabe feel the club suffered from that, and for not having a paid manager for two years after the last retired in 2002. Pastime had hired a full-time overseer since 1953. The quality of food and service in the club 's restaurant declined, among other problems.

"I think members weren't happy with the quality of the product," Ralph continued. "And people have less time than they used to and they've moved out to the suburbs.

"This isn't a North Side neighborhood club anymore. I think we became complacent. We felt good about the status quo. Now we're more efficient."

Ralph (38 years on the rolls) and Gabe (52) are both second generation in the club . So is Anthony Corcoran, who played in youth sports programs when he was a kid. He came to Pastime from a job as house manager at Syracuse Stage.

One of the first things he did was to repair the broken electric sign on the club 's Salina Street front. "That's symbolic," he says.

Anthony looks after a staff of 24 workers in what he says is a "full-time job, and then some." When a food server calls in sick, "I wait on table." Besides improving the club 's finances, he's seen to physical improvements around the building, and he listens to members' suggestions.

The club 's a busy place.

It has an eight-lane bowling alley, a fitness room and lockers; a golf driving range, gym, bar and lounge and rooms where members may run events ranging from club meetings to birthday parties to wakes.

"We have a lot of wakes," according to Gabe Buschle.

There are baseball and basketball teams and tournaments; youth sports that members' kids and neighborhood boys are invited to join; special events such as holiday parties and dances; a pitch league of members and regular poker games.

Syracuse Power Squadron meets at the club . So do Crouse-Hinds and city police PBA retirees. A club of local German Americans has a room in the basement.

The modern Pastime goes back to a group described as 30 "athletically-inclined young men" from the neighborhood who met at Reith's tailor shop in the 900 block of North Salina and created themselves a club in the summer of 1892. Back then, their interests were baseball (indoor and outdoor), rowing, track, cycling, basketball and bowling.

Those charter members - including Ed Dorner, the first president, who held the job 51 years - rented space on the North Side until officers bought the present building, which had been Sacred Heart Academy.

The vacant school then was owned by nearby St. John the Baptist Church and dates to 1856.

In 1959, the club added an annex to the north side of the landmark for new bowling alleys.

Over the years, Pastime has gathered in other local clubs, including G.S.I.O.C. and Ermenie. G.S.I.O.C. is memorialized in a room, even though exactly what those initials mean is lost. The first two stood for Gebhart Sauter's tavern, the group's first meeting place.

The venerable building next to Turtle Street is in good shape, according to Gabe Buschle and Ralph Dodge, but it needs lots of TLC and prayers that the old furnace makes it through another winter.

Gabe and Ralph pointed out that because of the club 's many loyal veterans who cherish the place, Pastime benefits from volunteer help, including donations of plumbing and electrical work. They tell me the nifty chairs we're sitting on in the lounge came from a $7,000 donation by member Richard Benjamin and his wife, Sophie.

They say Sophie really appreciated the gesture by the all-male club four years ago to invite members' wives and widows to join them in every part of the club "except the locker rooms," according to Gabe.

"We broke the chains," says Gabe, who was president at the time.

Sons of members get membership preference. "I joined as soon as I was eligible, at 18," Ralph explains.

He says today's club is diverse in its members, who range from 18 to 90, with a bulge in the middle between ages 45 and 50. The majority don't live on the North Side. A businessman from New York City who spends several days in Syracuse each month recently joined.

"We have professional men but this is still basically a blue-collar group," Ralph says. Way back, Pastime drew heavily on the old Catholic school "parochial league" for members.

He thinks the club still is a cordial meeting place to keep those old school ties bright: "We're a good bunch of guys. There's always someone here you know."

Dick Case writes about neighborhoods and neighbors every Thursday. Reach him at 470-2254, or by e-mail, citynews@syracuse.com.

About the Pastime Club